This coverage is made possible through a partnership with WABE and Grist, a nonprofit, independent media organization dedicated to telling stories of climate solutions and a just future.

Those issues were top of mind for second-year medical student Irene Liu when she was applying to medical schools. She had been interested in climate advocacy for a long time, and wanted to find a school where she could focus on the environment – but that didn’t work out.

“I didn’t find a medical school with that specific track, so I really didn’t expect to learn about it at all,” Liu said.

But when she got to Emory, she found out students were already working on it.

Fourth-year student Ben Rabin was concerned with climate change when he started the medical school several years before Liu, because climate change affects health in so many ways. Air pollution drives strokes and asthma, preterm births, low birth-weight babies and mosquito-borne diseases, not to mention the mental health impact of worsening hurricanes and wildfires.

But lectures rarely mentioned the added risks and complications from climate change.

By the time Liu got to Emory, Rabin and classmate Emaline Laney had worked with faculty to weave climate change into the standard things that all medical students learn, not just those who choose a particular class or track.

“So for example, we learn a lot about kidney injury, and kidney failure,” Rabin said. “And so we wanted to talk about what are some of the risks of extreme heat?”

He said it’s easier to get dehydrated when it’s very hot, and that can lead to kidney failure. 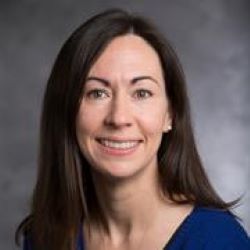 She credited students for leading the effort.

“I would not have thought as a still junior faculty member to go to the med school and say, ‘This is what we need to be teaching the students,’ ” Philipsborn said. “But the students had that vision, they came forward with the demand and said, ‘This is the greatest health challenge of our time, we need to be learning about it.’ ”

He said students often drive changes like this. They’ve pushed schools to better address racism and to incorporate telemedicine, and they’re leading the charge on climate change, too.

He said it’s especially important to teach this early in a doctor’s career.

“You can get physicians to be a little more holistic in their approach, and recognize these social determinants make a difference,” Benjamin said.

And he said it’s about more than just better treating patients.

“Physicians are influential in their community,” he said. “And so making sure they understand that [to] connect the dots for human health is important.”

That’s exactly what Liu is hoping – that discussions in doctors’ offices about the health impact of climate change can ultimately affect how society responds.

“I think that raising awareness to our patients about how air pollution and warming and wildfires are affecting your health and your children will have rippling effects,” she said. “I think I’ll hopefully motivate members in the community.”

Having these discussions in med school has had that effect on Liu. She called it eye-opening.

“It made me realize that there’s nothing within our health system that climate change doesn’t touch,” she said.

Emily Jones is a Grist reporter embedded in the WABE newsroom, covering environment and climate solutions. Previously, she managed the Savannah bureau for Georgia Public Broadcasting.

In the visual thalamus, neurons are in contact with both eyes but respond to only one

The visual thalamus is classically known to relay visual stimuli coming from the retina to the cerebral cortex. Researchers from

Memory helps us evaluate situations on the fly, not just recall the past: Widely known as crucial for long-term memory, hippocampus also supports short-term memory

Scientists have long known the brain’s hippocampus is crucial for long-term memory. Now a new Northwestern Medicine study has found

Members of the American Medical Association (AMA) weighed the risks and benefits of the U.S. implementing a vaccine mandate for

Vaccines against SARS-CoV-2 are proving quite safe and highly effective in the prevention of COVID-19, especially severe and/or fatal disease.

Doctors Business Network offers everything new and existing health care providers need to establish and build a successful career! Sign up with DBN today and let us help you succeed!